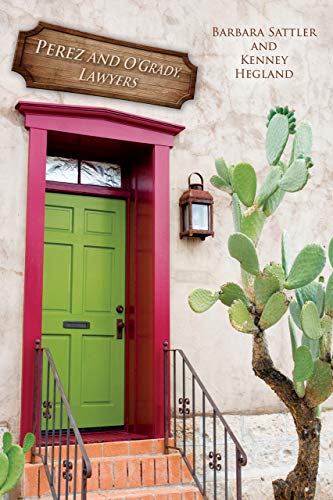 Two opposites, Frank Perez, married and father of two, and Sean O’Grady, ladies man, risk leaving their secure but unfulfilling jobs to start a law firm with the help of sexy Cynthia, an experienced legal secretary and Dusty, the firm dog. Four years pass, the firm prospers and help is needed.

The partners take a chance and hire Lucy Wagner, two years clean, after being addicted to opiates prescribed after a car accident. Lucy stopped using with the help of Serenity House rehab center and mentor, Bobby-Jo, and hopes to soon be certified to practice law. Co-author Sattler’s experience as a drug court judge and board member of a rehab center gives her an authentic voice as she treats the reader to a realistic look at the life of an addict especially in the richly detailed scene where Lucy takes a drug test.

Perez and O’Grady handle a variety of cases including a fraternity boy charged with date-rape, a mother who wants to disinherit her son because he is gay, a wealthy real estate mogul charged with drug dealing and a woman fighting addiction who is charged with possessing a small amount of heroin that belonged to her boyfriend. Unlike on TV and in movies, Frank and Sean don’t win all their case or always act brilliantly in court.

Frank and Sean meet with clients in their office and the jail, go to court and try cases. They fight with prosecutors and judges. Explain to parents that paying the bill doesn’t mean they call the shots. At weekly firm meetings, they plan trial strategy, talk law and gossip while Dusty looks for treats.

The characters are not just lawyers. Frank teaches trial practice at the University and daily attempts to balance the demands of work and family life. What to do when his son’s school event conflicts with a court hearing? He and his wife, a high school English teacher, argue about their future. Should they stay in the barrio and be role models or move to a nicer neighborhood with better schools and homes with pools?

Sean volunteers at Veterans court, flirts with Cynthia, and dates a variety of young woman while he wonders if he should change careers. At a family dinner, his mother pries into his love life and his sister wonders how he can represent rapists. Never sure he’s with the right woman or in the right job he ponders whether he’d be happier working in his father’s hardware store or joining a GMO doing good works in a foreign country.

Lucy graduated from law school and passed the bar, but due to her drug addiction, she hadn’t been approved by the Committee of Character and Fitness. Lucy worked as a law clerk at the public defender’s office, but after she joins the firm becomes more interested in elder law. She begins a relationship with Clay, an appellate lawyer, she’d had a crush on. She struggles with telling Clay about her addiction. Will he drop her after he finds out the truth? Their relationship takes a turn for the worst after Clay catches her checking his phone messages.

Sattler has written four previous novels about the criminal justice system. Hegland who has been referred to as one of the best legal writers in the country has written eight legal books and a novel, written and produced ten videos about legal issues for high school students and has a website with several short videos about elder law topics such as elder abuse, disability, driving, wills, durable powers of attorneys and many other topics. Sattler practiced criminal defense for seventeen years and was a judge for eleven. Hegland taught for more than thirty years at the University of Arizona law school with shorts stints at UCLA and Harvard. Their knowledge of the law and courts makes for convincing court room scenes and their characters are realistic and multifaceted.

What slavery reparations from the federal government could look like

Why Confederate Lies Live On

We Are A Hated People