In this comprehensive reference and background book, Dr. Roland Holou (www.RolandHolou.com) highlights the lives, visions, achievements, policies, and strategies of exceptional contemporary African Diaspora leaders across the globe. This inspirational collection of biographies motivates, challenges, and encourages current and future generations of people of African descent to take initiative and offers guidance to those interested in Africa’s development. It enlightens and empowers readers with stories that showcase the diversity, complexity, and richness of the ongoing global African Diaspora engagement efforts. It also presents powerful accounts of experiences, growth, struggle, failure, and success that will provoke interest in the field of Diaspora engagement and inspire readers to stand up and face life’s many challenges.

The featured leaders are known for their long-lasting achievements. Their impressive actions both contributed to important historical movements that significantly shaped and transformed the lives and history of people of African descent and removed major roadblocks preventing the prosperity of Africa and its Diaspora. They have brought about enormous and rare progress that would have been impossible without their leadership; their contributions have greatly improved the freedom and economic and political development of Africa and its Diaspora. If you are interested in learning the secrets of these modern leaders who have accomplished outstanding tasks and demonstrated professional excellence and character while performing duties related to Africa and its Diaspora, then this is the book for you.

Since influence can have negative effects as well, this book also addresses the destructive actions of certain leaders that are pulling down both Africa and its people.

Get your copy of the book at www.globaldiasporanews.com/order 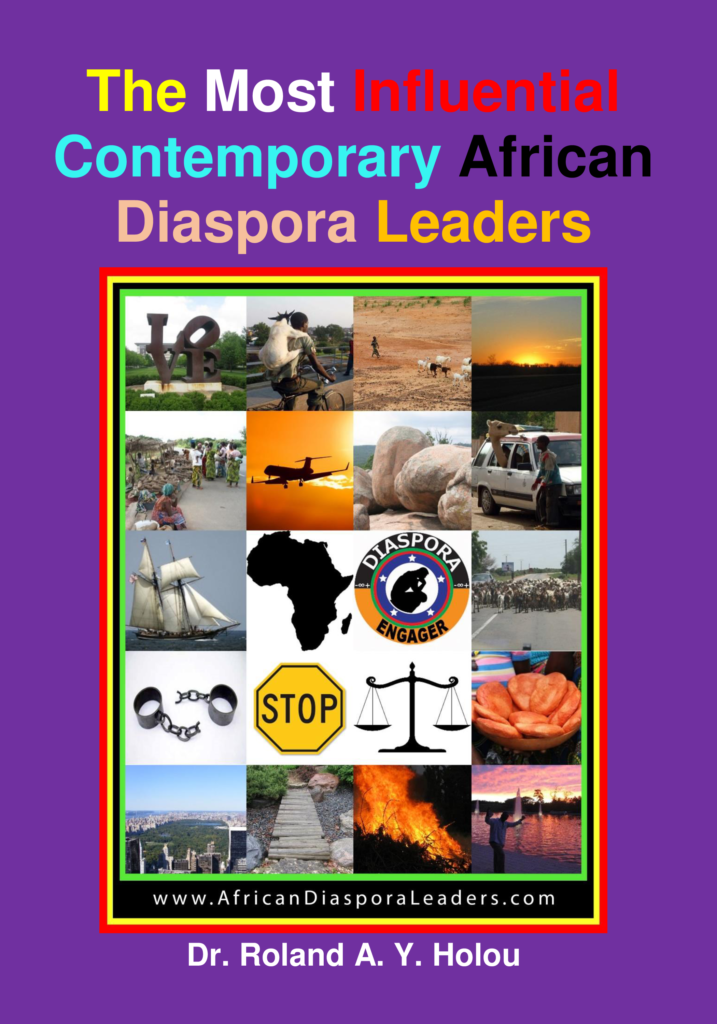 Criteria for selecting the most influential contemporary African Diaspora leaders:

The recipients were nominated and vetted by an International Selection Committee composed of some of the top undeniable African Diaspora leaders in the Caribbean, Europe, North America, South America, and West Africa. The leaders featured in this book met at least 5 of the following 10 criteria:

1. A person of African Descent not living in Africa whose vision has been embraced by others;

2. An African Diaspora whose Diaspora engagement initiatives are long-lasting or are at least theoretically promising;

3. An African Diaspora who has many followers or mentees because his or her creative actions have significantly shaped the lives and/or the history of Africans in Africa and/or in the Diaspora; or someone whose accomplishments are likely to positively affect many Africans in the Diaspora and in Africa;

4. An African Diaspora who has contributed to an important historical movement that has positively transformed the lives of Africans in the Diaspora and/or in Africa;

5. An African Diaspora who has led the way to remove a major roadblock that prevented the prosperity of Africa and/or its Diaspora;

6. An African Diaspora who has achieved something enormous and rare that has never before been achieved or that might have never happened without his or her leadership;

7. An African Diaspora whose contribution has opened a major door for the freedom, liberation, and economic or political development of Africa and/or its Diaspora;

8. An African Diaspora whose influence preferably goes beyond his or her own country of residence and who has demonstrated professional excellence and character while performing duties related to Africa and the African Diaspora;

9. An African Diaspora who is alive at the publication of this book and whose actions are greatly impacting lives today and likely in the future; and

10. An African Diaspora whose Diaspora contributions have been significantly changing the course of the history of Africans in the Diaspora or in Africa for at least 7 out of the last 30 years.

Here, influence is not defined as the most successful, rich, powerful, popular, philanthropic, famous, prestigious, or talented person. Although I acknowledged some of the most influential deceased African Diaspora leaders, I did not seek to rank past African Diaspora leaders, but rather focus on those who are still alive and who (or whose followers/mentees) are making a big difference today.

To learn about the criteria for selecting “The Most Influential Contemporary African Diaspora Leaders”, please visit www.globaldiasporanews.com/selectioncriteria/

Recipient of “The Most Influential Contemporary African Diaspora Leaders”

To view the “The Most Influential Contemporary African Diaspora Leaders”, please visit www.globaldiasporanews.com/recipient/

To learn more about the author of the book

Use the arrow of the carousel below to visualize more pictures of “The Most Influential Contemporary African Diaspora Leaders”.