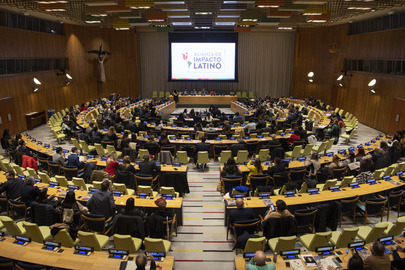 With close to a million people in grave danger, and more than 900,000 others who have in recent months fled their homes or shelters in Idlib, UN High Commissioner for Refugees (UNHCR) Filippo Grandi said: “We need an end to the fighting, and access to safety to preserve lives”.

The situation in Syria’s Idlib province is disastrous and getting worse.
Close to one million people are in grave danger.
Trapped civilians must be allowed to move to places of safety.https://t.co/oQMRf1ZK78

“The UN Secretary-General has appealed for parties to the conflict to respect the rules of war”, said the High Commissioner. “Every day that passes, that call is more urgent”.

He maintained that thousands of innocent people “cannot pay the price of a divided international community”, whose inability to find a solution will be “a grave stain on our collective international conscience.”

As in the past and the current moments of crisis, Mr. Grandi also appealed for neighbouring countries, including Turkey, “to broaden admissions, so that those most in danger can reach safety – even knowing that capacities and public support are already strained”.

“For these countries already hosting 5.6 million refugees, of whom 3.6 million are in Turkey, international support must be sustained and stepped up”, he stressed.

According to estimates, there are currently over four million civilians in north-west Syria – more than half of whom are internally displaced, many for years and some that have been forced to flee several times.

Some 80 per cent of the newly displaced are women and children and numerous elderly people are also at risk.

Assistance on the ground

The UN and other partners in Syria and elsewhere have been working over weeks to help those displaced in the Idlib area, where the intensity and scale makes shelter needs critical.

Meanwhile snow, flooding, sub-zero temperatures and rising fuel prices are adding to the challenges and suffering.

Humanitarian organizations are trying to reach people by all means possible, including through cross-border shipments of shelter and emergency aid kits from Turkey.

While local partners on the ground are striving to continue to provide psychosocial support, legal counselling and assistance, and to help vulnerable people get access to basic services, many of them are themselves caught up in the turmoil.

UNHCR is seeking to help up to 275,000 people with essential aid items and another 84,000 with shelter inside Idlib. Additionally, it has prepositioned stocks in the region to meet the immediate needs of up to 2.1 million people, including tents for 400,000.

“Let me be clear,” said the UN High Commissioner, “as humanitarian agencies, we are striving to save lives, but the space for these efforts is shrinking. In the face of such suffering, humanitarian aid alone cannot be the answer”.

Women, girls in the crosshairs

Meanwhile, the UN Population Fund, UNFPA, is also “gravely alarmed” about the unfolding humanitarian situation, saying that women and girls are bearing the brunt.

“There are disruptions in quality reproductive health care and an escalating risk of gender-based violence”, UNFPA said in a statement on northwestern Syria.

Moreover, Syrian women and girls have repeatedly stated that they seldom feel safe with the risk of gender-based violence.

As a result of these displacements, vulnerable people are living in precarious locations in tents or in open spaces.

In some instances, some 20 to 30 people are sheltering in unfinished buildings – creating privacy and protection concerns for women and girls and has reportedly led to a number of rape incidents.

And due inaccessible medical facilities, there are reports that pregnant women are unable to receive medical care, including assisted deliveries and cesarean sections.

The mass displacement, coupled with the disruption in services due to the damage wrought on service delivery centers, places the lives of countless women and girls at risk, further disrupting the humanitarian community’s ability to deliver much-needed services, according to UNFPA.

“This suffering is not acceptable”, UN’s women’s health agency spelled out. “The targeting of civilian populations must stop”.

Patients turned away from PE clinic after nurse contracts Covid-19