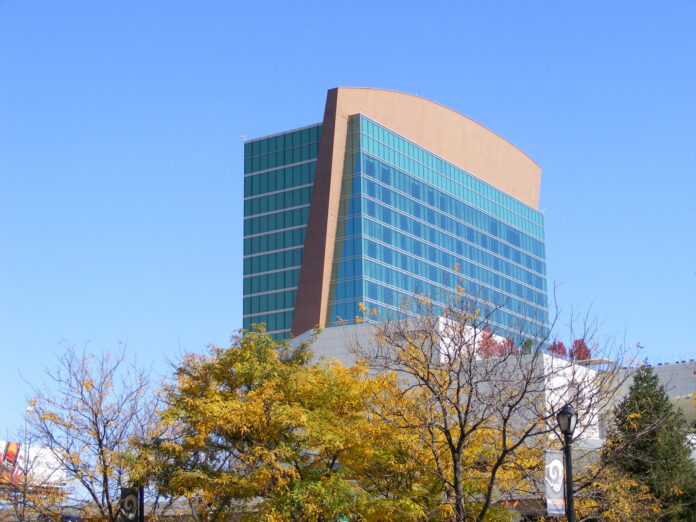 Live theatre is back. And in Los Angeles, you can now see the national tour of “The Band’s Visit,” playing at the Dolby Theatre.

Based on the 2007 Israeli film, the musical first appeared off-Broadway, then transferred to the Great White Way, where it won the Tony Award for Best Musical. The score is by David Yazbek (“The Full Monty,” “Dirty Rotten Scoundrels”), and the stage adaptation by Itamar Moses.

The events depicted don’t seem life-changing, but in some ways, maybe they are. A group of musicians from Egypt has been stranded in a run-down Israeli town, where the only excitement is eating at a restaurant, or maybe visiting a disco.

The band quickly encounters Dina, a tough-skinned Israeli divorcee, along with many other town residents. The musical takes place in 1996, and while it’s unspoken, there is obviously some tension between the Arabs and the Israelis, even if their countries had been at some form of peace for almost 20 years.

One of the brightest spots of the musical is its silent plea for Israeli and Arab peace. During the show, we quickly see that very little separates the Egyptians and the Israelis. They have the same hopes, dreams, and fears — they even share much of the same music and culture.

The musical invites us to see what could be possible if all the parties in the region looked at each other as individual people, as opposed to stereotypes or bogeymen. (One scene should be noted, however, in which an Israeli guard is depicted as being cruel because he questions why an Egyptian man is at an Israeli disco. Although the play tries to avoid politics, it shouldn’t ignore the fact that several large-scale terrorist attacks have been carried out by Arab perpetrators in places like discos).

More importantly, though, this musical is about people: their hopes, dreams, desires, and ultimately, their search for connection. The genius of “The Band’s Visit” is that it shows us that we’re all the same — whether Arabs or Israelis, liberals and conservatives in America, or people in disputed or conflict-ridden areas all over the world.

At the end of the day, we are all looking to be part of the human experience — to shed our loneliness, to fall in love, to find the joy in each day, and to leave a better world for ourselves and our children than the one we inherited.

Of course, there are truly bad actors who don’t share those goals. But “The Band’s Visit” isn’t interested in them; it’s interested in the rest of us, people with mostly good intentions, who sometimes get in our own way, and cut ourselves off from the things we most want and need.

As Dina and Egyptian band leader Tewfiq, Janet Dacal and Sasson Gabay both do very fine acting work (Gabay recently did a tremendous turn on the most recent season of “Shtisel.”) The score’s best number, “Omar Sharif,” however, isn’t given its best airing here.

But the score on the whole is enjoyable, and there are 3-4 true stand-out numbers, including “The Beat of Your Heart,” “Haled’s Song About Love,” and the rousing “Answer Me,” which ends with a beautiful stage picture that really pulls the entire show — and its themes — all together.

Other stand-outs in the cast are David Studwell, and especially Joe Joseph. The onstage musicians are unbelievably good, and part of the joy of the production is getting to watch them play onstage.

It’s hard to watch a musical right now without thinking about the recently departed Stephen Sondheim, and the works he created for the stage. While “The Band’s Visit” doesn’t aim to approach the levels that someone like Sondheim explored, it’s a charming evening — and one that will make you reach out for connection with others.

It’s certainly a show I was happy to see — and I think you will be too.

“The Band’s Visit” plays in Los Angeles through December 19th.

The author is the Opinion Editor and a culture writer at The Algemeiner. You can see some of his creative work at www.Bloomywood.com

Source of original article: David Meyers / Opinion – Algemeiner.com (www.algemeiner.com).
The content of this article does not necessarily reflect the views or opinion of Global Diaspora News (www.GlobalDiasporaNews.com).

In Texas: The Target Was Jewish, the Motive Antisemitism

How Israel Should Handle the US-China Rivalry

Will Devotion to Dialogue Stop Us From Understanding Another Synagogue Attack?

Tu B’Shvat: The Festival That Proves the Jewish People’s Connection to the Land of Israel

What CAIR Shares in Common With Synagogue Hostage Taker

Iran Threatens to Murder an American President, and the Media Yawns