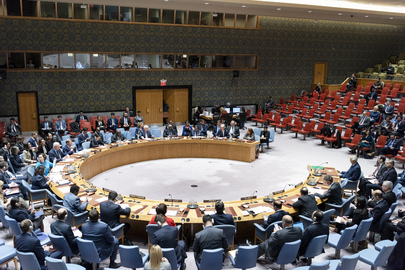 Antonio Guterres strongly condemned the coordinated assaults near the capital, Bangui, which were carried out by unidentified armed combatants.

The UN mission in the country, MINUSCA, reported that some armed elements were killed, while others were arrested and weapons seized.

“The Secretary-General recalls that attacks against United Nations peacekeepers may constitute a war crime,” his spokesperson, Stéphane Dujarric, said in a statement.

“The UN chief has called on the authorities to take all the necessary measures to ensure accountability for these heinous attacks.”

Violence has flared in parts of the CAR surrounding presidential and legislative elections held in late December, forcing thousands to flee their homes or to neighbouring countries.

The early morning attacks on Wednesday occurred in the outskirts of the capital and targeted two army brigades, according to media reports.

“The attack was repelled by the peacekeepers, together with the Central African armed forces,” Vladimir Monteiro, the MINUSCA spokesperson, said in a statement translanted from French.

“MINUSCA strongly condemns the attacks by the anti-Balaka, UPC, 3R and MPC coalition armed groups and their political allies, including former President François Bozizé,” he said.

“The Mission holds them responsible for the consequences of this violence on the civilian population and stresses that attacks against peacekeepers can be considered as war crimes and prosecuted.”

The Secretary-General also expressed concern over continued destabilization efforts by armed groups in the CAR.

He called on all parties to stop violence and engage in meaningful dialogue, and underlined the UN’s commitment to ongoing peace efforts.

Mozambique: UN responds as thousands are caught in the wake of...