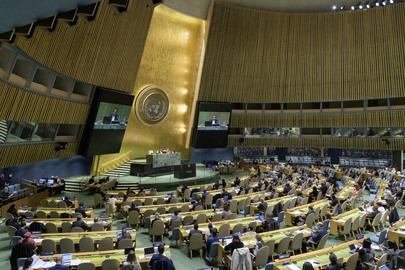 A day after a deadly earthquake hit eastern Afghanistan killing at least 1,000 people, UN humanitarians confirmed on Thursday that more emergency relief has been deployed to help affected communities.

The World Food Programme (WFP) said that 18 trucks were being sent with food and logistics support.

This includes high energy biscuits and mobile storage units. WFP plans to provide emergency food to an initial 3,000 households “and is ready to ramp up its support” once it has more information.

The remote districts of Giyan and Barmal in Paktika province and Spera in Khost province were among the areas worst-hit after the 5.9 magnitude quake struck in the early hours of Wednesday morning, while people were sleeping.

In Barmal, more than 70 per cent of homes were completely destroyed.

At least 1,000 people have reportedly been killed, with 2,000 others injured, and WFP said in a statement that rescue efforts have continued to be hampered by heavy rain and winds, as well as poor internet connectivity.

The disaster has added to Afghanistan’s existing “unprecedented crisis”, the UN agency noted, referring to the 19 million people who face acute hunger across the country, because of drought and the economic crisis linked to the Taliban takeover last August.

To Ukraine, where a new count of damage to the countrys cultural heritage has revealed that more than 150 sites have been “partially or totally destroyed” since the Russian invasion.

UN agency UNESCO carried out the checks and on Thursday reiterated its call to halt “repeated attacks” on cultural sites.

Most of the damage is in three regions: Donetsk – where the fighting is still particularly intense (45 damaged cultural sites), Kharkiv (40) and Kyiv (26).

Since the beginning of the war in Ukraine, 70 religious buildings have been damaged irreparably or in part, along with 30 historical structures, 18 cultural centres, 15 monuments, 12 museums and seven libraries.

In a statement, Director-General of UNESCO Audrey Azoulay insisted that “cultural heritage, in all its forms, should not be targeted under any circumstances”.

Ms. Azoulay cited the Hague Convention for the Protection of Cultural Property in the Event of Armed Conflict as the guiding international humanitarian law on the matter.

Because of the global hunger crisis, every single minute, one child is pushed into life-threatening, severe malnutrition.

That’s the alarming message on Thursday from UN Children’s Fund UNICEF, which issued the alert for 15 countries in crisis where the situation is worsening.

The UN agency warning comes as world leaders prepare to gather for the G7 summit in Germany in coming days.

UNICEF  has called for $1.2 billion to meet urgent needs of eight million children at risk of death from severe wasting in 15 mainly African nations, such as Burkina Faso, Chad, Kenya, Somalia and Sudan, but also Afghanistan and Haiti.

The UN agency stressed that the number of desperately hungry children suffering from severe wasting has continued to grow, in the countries where it has raised the alarm.

Between January and June, that number increased by well over a quarter of a million, from 7,67 million to 7,93 million children.

This comes as the price of ready-to-use food to treat severe wasting has soared by 16 per cent in recent weeks, owing to a sharp rise in the cost of raw ingredients.

UNICEF warned that the price spike has left up to 600,000 additional children “without access to life-saving treatment and at risk of death”.