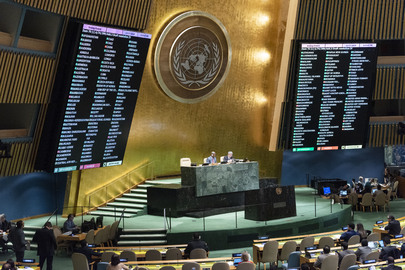 We must end ‘deadly addiction’ to coal for planet’s sake, urges Guterres

The world’s major polluters have not been bold enough in their pledges to cut emissions, UN Secretary-General António Guterres said on Tuesday – but he’s insisted that there’s still “a fighting chance” to hold back global warming if fossil-fuel power stations are phased out.

In an appeal to governments, private companies and local authorities to end our “deadly addiction to coal”, the UN chief reiterated the urgent need to reduce emissions by 45 per cent this decade.

Highlighting three key measures, Mr. Guterres called on countries to cancel all global coal projects in the pipeline – in particular, the 37 wealthy countries of the Organisation for Economic Co-operation and Development – OECD – who should commit to phasing out coal by 2030.

The UN chief also called for an end to the international financing of coal plants and investors to shift to renewable energy projects.

This transition could happen “coal plant by coal plant, if necessary”, Mr. Guterres insisted, in comments at the Powering Past Coal Summit, hosted by the UK and Canada.

The equitable coronavirus vaccine delivery initiative COVAX that delivered its first doses to west Africa and Latin America in recent days, faces potential obstacles that must be overcome if a fully global rollout is to be achieved, UN health agency chief Tedros Adhanom Ghebreyesus said on Tuesday.

Speaking after Côte d’Ivoire, Ghana and Colombia received their first round of AstraZeneca(AZ)/Oxford jabs, Tedros said that the “many challenges” included overcoming local production barriers relating to intellectual property rights.

The COVAX initiative aims to deliver just under two billion vaccines to around 190 countries and territories.

One of the partners of the scheme, the Coalition for Epidemic Preparedness Innovations (CEPI), said that “the job is not done” when it comes to developing vaccines against COVID-19 as emerging variants risked complicating the task of ending the pandemic.

“We must remain firmly focused on delivering equitable access if we are to stop the endless cycle of lockdowns,” said CEPI chief executive Dr Richard Hatchett.

One in four people projected to have hearing problems by 2050

Nearly 2.5 billion people worldwide ─ or one in four people ─ will have some degree of hearing loss by 2050.

That’s the warning from the World Health Organization (WHO), which published its first World Report on Hearing on Tuesday.

At least 700 million of these people will require access to ear and hearing care and other rehabilitation services unless action is taken, the UN health agency said.

It noted that untreated hearing loss can have a devastating impact on people’s ability to communicate, study and work.

People’s mental health and their ability to sustain relationships can also be affected, the WHO said, in a call to all Governments to invest in finding solutions to the problem.

Those countries that did could expect a return of nearly $16 for every $1 they spent, it said.