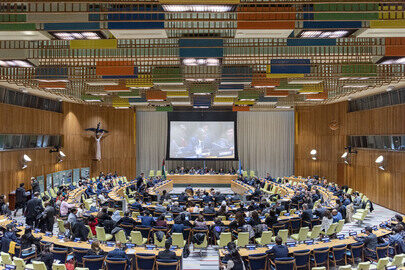 In a statement on Thursday, Tom Andrews warned that the “pace and scope” of the international response to the military coup in the southeast Asian nation “is falling short of what is required to head off a deepening crisis”.

“Conditions in Myanmar are deteriorating … but they will likely get much worse without an immediate robust, international response in support of those under siege”, he urged.

“It is imperative that the international community heed the recent call of UN Secretary-General António Guterres for a ‘firm, unified international response’.”

Mr. Andrews went on to note that the “limited sanctions” imposed so far by Member States do not impact the junta’s access to revenue that help sustain its “illegal activities” , with its most lucrative business assets “left unscathed”.

“The slow pace of diplomacy is out of step with the scale of the crisis”, he added, calling for the “incremental approach” to sanctions to be replaced by a robust action that includes a “diplomatic offensive designed to meet the moment”.

The Special Rapporteur said he was receiving reports indicating that the situation in Myanmar is in danger of spiralling further out of control and warned of a dramatic increase in loss of life.

“Without a focused, diplomatic solution, including the hosting of an emergency summit that brings together Myanmar’s neighbours and those countries with great influence in the region, I fear the situation of human rights in Myanmar will further deteriorate as the junta increases the rate of murders, enforced disappearances and torture”, he said.

He added it was critical that the people of Myanmar, the Committee Representing Pyidaungsu Hluttaw (CRPH) – the democratic opposition from the National League for Democracy  – other leaders and activists, “see that the international community is working towards a diplomatic solution in support of the peaceful Civil Disobedience Movement”.

“This combined course of action – domestic peaceful resistance, sustained pressure, and international diplomatic momentum – will have a greater chance for success than taking up arms and will save untold numbers of lives”, Mr. Andrews said.

“Member States have an opportunity to demonstrate this alternative, but the window in which this can be achieved is closing rapidly. I fear that the international community has only a short time remaining to act.”

According to estimates one in four people in Myanmar are migrants, either internal or international. In this file photo, migrant workers commute to their workplace in the Mandalay region.

Meanwhile, the crisis continues to impact Myanmar’s most vulnerable, including migrants.

According to the UN’s International Organization for Migration (IOM), the martial law imposed in Yangon townships forced thousands of migrants to return to their places of origin, many with little savings to sustain themselves and their families.

The decree was imposed in the Hlaing Tharyar township on 15 March, following a violent crackdown by security forces, after unknown actors set fire to factories that were either operated or part-owned by Chinese investors.

“IOM estimates that approximately 100,000 migrants have returned to their communities of origin, mainly Rakhine state and Ayeyarwady region, in search of safety and security”, Farhan Haq, UN spokesperson said on Wednesday, citing reports from the agency.

“They are returning to communities already in distress due to the impacts of the military takeover, including the suspension of banking services and scarcity of food. Having left rapidly and using up their limited savings, many migrants cannot meet basic needs, including food and water”, he added.

Earlier this month, the UN World Food Programme (WFP) reported sharp increases in food and fuel prices in many parts of Myanmar, on the back of supply chain and market disruptions. Humanitarians worry that if the price trends continue, they will “severely undermine” the ability of the poorest and most vulnerable to put enough food on the family table.

Also on Wednesday, the independent UN body documenting evidence of the most serious crimes and rights violations in the country said that it remains committed to ensuring accountability in Myanmar.

Nicholas Koumjian, head of the Independent Investigative Mechanism for Myanmar (IIMM), said in a statement that the body continues to “collect evidence and build case files” of the most serious international crimes that have been committed throughout the country since 2011.

He added that since the Myanmar military or the Tatmadaw, as it is known, seized power in February, the Mechanism has also been collecting evidence to analyse whether crimes against humanity have been committed following reports of arbitrary arrests, torture, enforced disappearances and the use of force, including lethal force, against those peacefully opposing the coup.

“We are committed to playing our role to ensure accountability for these crimes and continue to call on the Government of Myanmar to cooperate with our effort to establish the truth”, Mr. Koumjian said.