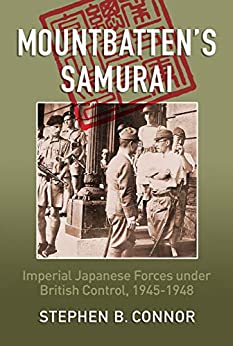 ‘This is an important book that uncovers some remarkable secrets… Connor is an outstanding historian of wartime Asia and he tells his story well.’ Richard J. Aldrich, author of GCHQ

Six weeks after Japan’s surrender in August 1945, British and Japanese troops were fighting side-by-side against nationalist revolutionaries in ‘peacekeeping’ operations in Indonesia and Vietnam. In Java, Dutch civilians cheered as their former jailors, members of the infamous kenpeitai rescued them from what had seemed certain death at the hands of armed mobs. In November 1945 a Japanese Army officer was recommended for a British Distinguished Service Order (DSO) for services rendered to South-East Asia Command after his troops helped restore order and save thousands of civilian lives.

‘The Japanese may be so deployed and…drastic action including shooting should be taken against any who refuse’.
Adm Mountbatten (to War Office), Kandy, 24 August 1945

‘The men concerned are surely Japanese prisoners-of-war and if the War Office, in order to evade compliance with the Geneva Convention, have decided to call them something else, this should not…avoid responsibility for decent treatment.’
Foreign Office, London, 18 March 1946.

In August 1945 Britain accepted responsibility for the care and repatriation of over 750,000 Japanese military personnel in Southeast Asia. Short of manpower and resources in Burma and Malaya, and with its French and Dutch Allies’ colonial territories of Indo-China (FIC) and the Netherlands East Indies (NEI) embroiled in revolution, Britain found it expedient to press the Japanese—who were denied Prisoner of War (PoW) status—into military operations in support of European colonial interests and then ignore repatriation commitments by deliberately retaining over 100,000 as mass, unpaid labour.

‘[A] stain which would blemish the honor of the United Kingdom…’
Gen Douglas MacArthur, Tokyo, March 1947

Mountbatten’s Samurai reveals a Britain struggling to match Great Power status and obligation without a Great Power budget or capability in Southeast Asia in the face of strong criticism from the US State Department in Washington, General Douglas MacArthur’s SCAP GHQ Occupation headquarters in Tokyo, the International Committee for the Red Cross (ICRC), the Japanese Government and even the Vatican.

‘A perceptive, detailed and shrewd analysis of the prolonged and secret diplomatic stand-off between London and Washington over Britain’s post-war use of tens of thousands of surrendered Japanese in combat operations in support of European colonial interests in contravention of the Geneva Convention, and later as deliberately retained, unpaid labour in breach of the Potsdam Agreement’. (Publisher’s Catalogue)

The Price We Pay: What Broke American Health Care–and How to Fix It

As Juneteenth becomes a federal holiday, the US needs a culture of reparations

Impact of COVID-19 on Skilling, Upskilling and Reskilling in Enterprises