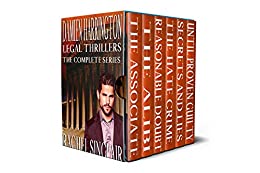 Over 150,000 books sold! With over 2,500 pages of thrills, humor, suspense, action and exhilarating courtroom scenes, this series is for Grisham fans and is not to be missed! Be prepared for late nights….

MEET DAMIEN HARRINGTON – A Kansas City attorney and single father who spent seven years in prison after being wrongfully convicted, Damien devotes his life to ensuring justice for the oppressed and wrongfully charged. In these six legal thrillers, he defends mobsters, billionaires, his own mother and a former white supremacist. Handsome, passionate, intelligent, charismatic, funny and kind, Damien is one that anybody would want on their side.

Damien is introduced as he assists Harper in defending mobster Erik Sargis. This is a special case, because if Erik gets convicted Harper’s life is in danger. Meanwhile, he also works a wrongful death case that he regrets taking because it turns into blood money.

★★★★★"A wild ride from beginning to end. This story has everything; plot twists, characters you either love or hate, family dynamics of all kinds, broken love, promise of new love, and even some laughs along the way!!" Kindle Reader

Damien defends a mobster’s wife, Gina DeGrazio, in a case where nobody is who they seem. Damien must break all ethical rules to defend her properly and risks being disbarred for doing so. He also takes a case involving a slum lord and toxic mold, and, in helping the desperately poor get justice, he starts to feel more alive than he has in years.

★★★★★"I found this book to be a great legal thriller. Good storyline and great characters. It’s an edge of your seat, fast paced novel that is hard to put down. Highly recommended reading." Kindle Reader

Damien defends a prominent art dealer who is accused of murdering a prominent New York artist. The art dealer has amnesia about the event. A shocking revelation upends the case completely.

★★★★★"The end results were so unexpected. The suspense was riveting and kept me trying to solve who committed the murder. There isn’t anything that I can say I liked the least. It was all good writing." Kindle Reader.

Damien’s client is a white supremacist who is accused of murdering a transgendered woman. In a case where nobody is who they seem, quite literally, Damien is determined to find the truth about how killed the woman. An 11th hour witness provides an important clue.

★★★★★"I love this series. Extremely well written and researched, keeps me guessing constantly. I am ready for the next book in the series. Keep them coming." Kindle Reader.

Damien defends his own mother, who is accused of murdering her sometime lover.

As Damien gets further into the case, he finds that nothing is what it seems. Somebody apparently wanted Dr. Dunham dead – but who? And why? Damien discovers the shocking conspiracy that is behind the man’s death, but he finds himself in a race against time to find the evidence to prove his mother’s innocence.

True, he doesn’t get along with his foul-mouthed, drunk mother, but she’s still his mother.

★★★★★"Another page turner. All of Rachel Sinclair’s books is a page turner and a fabulous read. Well done – hope the next book comes out quickly!" Kindle Reader.

Thinking Like a Writer: A Lawyer’s Guide to Effective Writing and Editing

Liberation’s Coming From a Black Thing