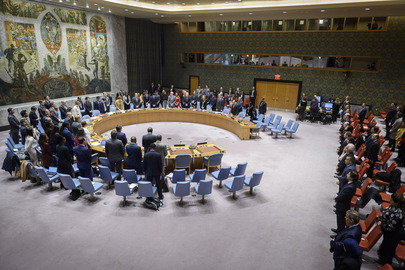 The UN Peacebuilding Fund, (PBF), which emphasizes the role of women and youth in peacebuilding efforts through their meaningful participation, began work in Haiti in 2019 in response to needs identified by the government.

Ahead of the International Day of Peace marked annually on 21 September, here are five things you need to know about the PBF.

Globally, the Peacebuilding Fund began work in 2006 in countries or situations at risk or affected by violent conflict. The UN Secretary-General António Guterres described it as “a critical vehicle to support resilience and prevention.”

Between 2006 and 2021 the PBF allocated $1.67 billion to 65 countries to sustain peace efforts. Haiti has received around $20m for nine projects. These interventions focus broadly on implementing and sustaining peace agreements, dialogue and peaceful coexistence and re-establishing basic services that can contribute to building peaceful societies.

Instability and insecurity, propelled by stark inequalities, have been long-standing problems in Haiti and are the key reasons why the Government called for the support of the PBF.

The assassination of the Haitian president in July 2021 and a destructive earthquake in the south of the country a month later compounded the insecurity caused by the growing presence and influence of gangs.

This insecurity has worsened in the capital Port-au-Prince over the past year, as gang violence, exacerbated by the proliferation of illicit weapons and ammunitions, has intensified. The number of cases of kidnapping for ransom has also escalated.

In the commune of Cite Soleil, one of the capital’s poorest neighbourhoods, 99 people were killed and 133 injured during one particularly violent week of clashes in July between gangs vying for control of territory.  Hundreds of houses were destroyed and thousands of people fled to safer localities, many of whom were supported by the United Nations.

Edwin* a youth leader living in Cite Soleil and who is part of a group of young people supported by the PBF, said that he witnessed heavy fighting in the streets adding that “I go to bed and wake up to the sound of gunfire which is very stressful.” The group brings youth together from neighbourhoods where rival gangs are active. “We want our voices to be heard outside Cité Soleil, because if no-one hears us nothing will change,” he said.

The UN is supporting the reopening of schools like Lycée National de La Saline.

Gang violence is only one very tangible manifestation of insecurity and the lack of peace, but the lives of Haitians are being impacted in countless other ways. In Cite Soleil, roughly 95,000 school children in over 300 schools had their education disrupted by violence.

More than 2,500 people fled the commune and had to seek support from the UN. The blockading of roads to the south has stopped the free flow of people and services in both directions, making it difficult for farmers to get their crops to market in Port-au-Prince and for aid and reconstruction materials to be delivered to the earthquake-affected southern peninsula.

“Reducing violence and conflict, accessing justice and establishing lasting peace and stability are the priorities of the UN’s Peacebuilding Fund,” said Ulrika Richardson, the UN Resident and Humanitarian Coordinator in Haiti. “. It is through the leadership of a broad range of local and national actors, that we envision accompanying Haiti in building a peaceful and prosperous society for all Haitians.”

Without stability, security and justice, economic progress is near impossible. This is unfortunately becoming increasingly clear with the continued slow-down of the Haitian economy whose effects are most felt by the most vulnerable and marginalized individuals and communities.

The PBF has played a particularly important role in Haiti following the closure of the UN peacekeeping mission, MINUSTAH, in 2017. The PBF is one of the few resources available to the United Nations to scale up efforts in areas previously covered by the mission or areas requiring renewed attention.

The fund has focused on a number of key areas including community violence reduction with an emphasis on supporting and promoting participation at the community level with a focus on the youth. It has also promoted social cohesion and mental health, especially for women and girls, and it is supporting activities to prevent election-related and political violence, again with a special emphasis on protecting and empowering women.

Strengthening the justice system including providing legal aid to vulnerable populations while reinforcing coordination between judicial actors and the penal system is also a PBF priority.

Detainees in a Haitian prison

Ultimately, the PBF is a people-centered funding mechanism, that has resulted in notable successes.

As a 15-year-old, Renel* was held in detention without trial for three years in a prison in Les Cayes after being wrongfully accused by a shopkeeper of stealing two ducks. His case drew the attention of the United Nations and was referred to a legal aid office, established by the UN Development Programme (UNDP), the UN’s political mission in Haiti, BINUH and the Haitian Ministry of Justice and Public Security and funded by PBF.

Renel, along with 67 other individuals, was released from detention. “Kids should be in school, not in jail,” he said.

Sylvie participates in a PBF-supported group in the gang-affected Martissant neighbourhood, which seeks to prevent and resolve disputes at the community level. With a focus on women’s empowerment and countering sexual violence she said: “the situation may not be resolved tomorrow, but we are hopeful that we will see changes in the longer-term.’’International Day of Peace is observed around the world on 21 September. The 2022 theme is “End racism. Build peace”