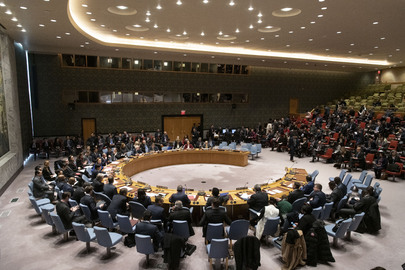 Described as a “beacon of hope” by UN Secretary-General António Guterres at the signing ceremony for the plan on 27 July in Istanbul, with representatives from Russian and Ukraine, the agreement has made it possible for almost 240 vessels to leave Ukrainian ports with some 5.4 million metric tons of grain and other foodstuffs, since 1 August 2022.

“What I am seeing with the Black Sea Grain Initiative is an increase in confidence, confidence in the shipping community, the commercial shipping community,” said Dennis Malone, a UN Representative at the Joint Coordination Centre in Odesa, for boats arriving and departing from the Ukrainian port.

“We are seeing the price of shipping insurance reduced, we are seeing the quality of ships that are being used to come in to export the grain are increasing. We are also seeing an increase in confidence in the local community, in the farming community. They are starting to see that their grain is being exported, that the silos are being emptied and that they can start planning for future harvests.”

One ship in Odesa, the BC Vanessa, is the fourth humanitarian vessel to be chartered by the UN World Food Programme (WFP) out of Ukraine. After it left Ukrainian waters, its cargo was inspected in Istanbul, as with all of the ships which are part of the initiative.

Its precious cargo – 30,000 tonnes of wheat – is destined for Afghanistan, to alleviate the desperate humanitarian emergency there.

Other UN shipments taking part in the initiative have already delivered wheat to Ethiopia and Yemen.

One result of the deal has been a sharp drop in global food prices, which has allowed consumers to purchase grain more easily, once again.

Ukraine, one of the world’s largest grain exporters, normally supplies around 45 million tonnes to the global market every year.

After Russia’s invasion of the country on 24 February, mountains of grain built up in silos, with ships unable to secure safe passage to and from Ukrainian ports. Today, although sea routes are open again, serious economic challenges remain for the country’s farmers.

“For the moment, the prices offered are too low,” said Vyachyslav Nevmerzhytskyi, Deputy Chairman of the Association of Farmers of the Odesa region. “Today, I would be selling at a loss because the cost to grow and produce the grain remains (higher).

“So, if I agree to sell at these prices now then I would be making a loss. Therefore, this is a matter of survival, the financial survival of (my) farm businesses.”

Transporting the grain to the ports also remains incredibly slow. Truck drivers wait in kilometre-long lines to get reach Yuzhny port and some have been stationary for days.

“After the truck is loaded, it takes three to four hours for me to get here, ready for discharge,” one drive told UN News. “But I’ve been standing (here) for five days. There is no movement, there is no administration, there is no-one to explain how long we will stay here, what to do, to move, to go home.”

In line with the Black Sea Grain Initiative, Ukrainian vessels guide cargo ships seeking passage to and from Odesa, Chornomorsk and Yuzhny, through a maritime humanitarian corridor in international waters. Their task is to steer well clear of stretches of water that have been mined.

Stops on the way

Once the ships near Istanbul, they are inspected by teams from another Joint Coordination Centre based in the Turkish city – as was the case for the BC Vanessa on Wednesday – with representatives from Russia, Türkiye, Ukraine and the UN all involved.

Loaded with humanitarian supplies, the vessel then left Istanbul’s waters, setting a westerly course for the Turkish port of Samsun, where its wheat will be milled.

The flour will then be shipped onto another vessel to Karachi and then transported by road to Afghanistan for distribution.